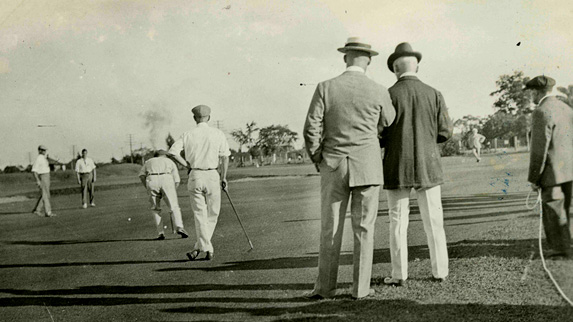 The first PGA Championship of Canada is played at Mississauga Golf and Country Club on the day before the Canadian Open at Rosedale Golf Club. Charles Murray wins the tournament in a field of just 14 pros.

The History of the PGA of Canada 1911 – Present 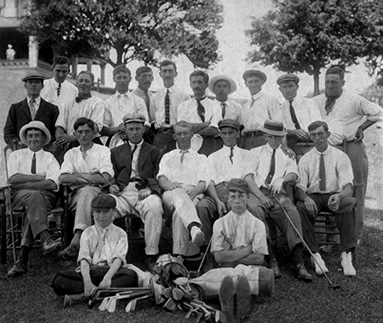 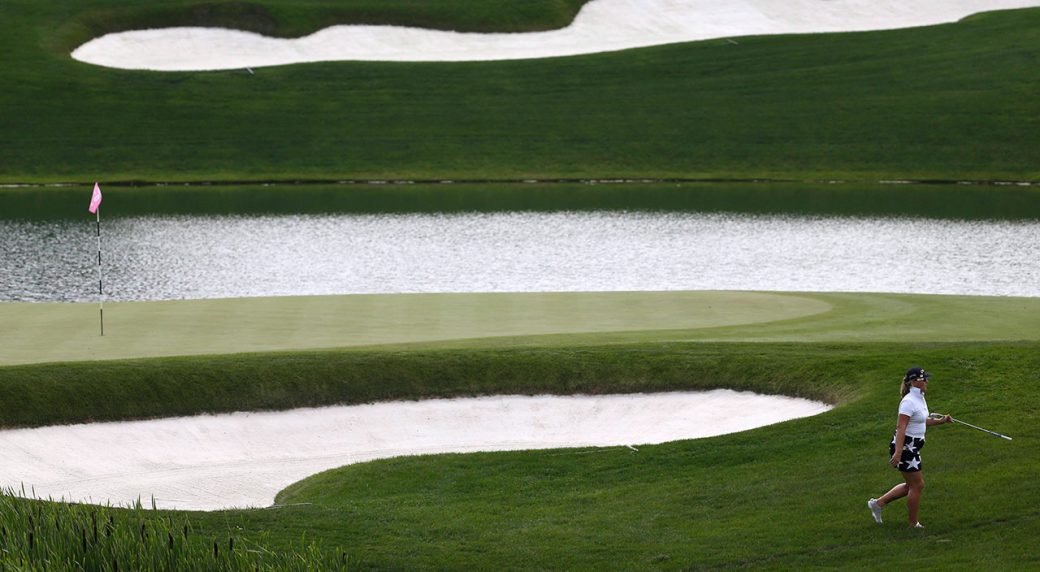 Mike Weir may no longer be a fixture on the PGA Tour, but as the only Canadian male to win a major golf championship (2003 Masters), he remains an authoritative voice on the sport in this country. 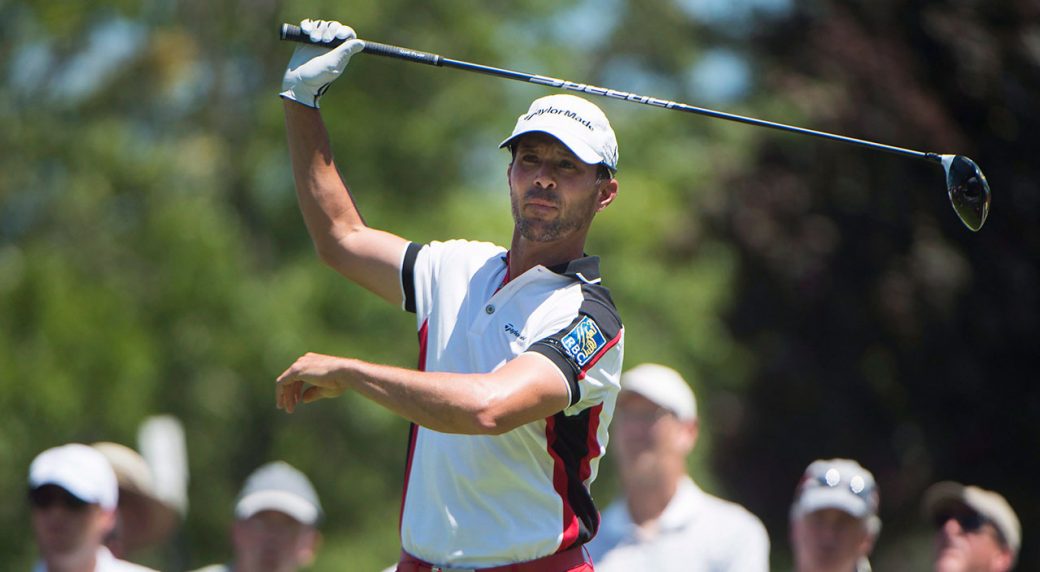 At the upcoming Presidents Cup in New York, Weir will serve as an assistant captain for the International team, where he’ll advise fellow Canadian Adam Hadwin, who will be participating in the biennial competition for the first time.

Weir has kept busy this summer playing a handful of events on the European Tour, trying to stay sharp on the course before he turns 50 in two years time when he becomes eligible for the Champions Tour.

How do you feel with the Presidents Cup right around the corner?

Starting to feel it now that it’s closer and now that the team is finalized. The juices are starting to flow. We’ve been talking amongst our captains about potential teams, and the guys are really motivated… being so close last time in Korea (the International squad lost by just one point) I think there are a lot of guys on the team from last time who are very motivated.

What do you think it’ll mean for Adam Hadwin’s career to make the team for the first time?

Super happy to see Adam get in there and, to me, not only does it help your career playing with great players, but the confidence level you can gain from it is huge. My first time playing, I felt very confident after that. (I was) accepted by guys that I looked up to for a long time. You’re playing against guys on the other side that I hadn’t played against a lot because it was my second year on Tour, but to play with them and beat them and do all those things gave me a lot of confidence, but also there’s a different connection amongst those teammates going forward that I still have to this day.

We still sit down at lunch and we still talk about stuff like, ‘Hey remember this in 2005 or 2003 with Ernie (Els) and Tiger (Woods) in the playoff…’ that’ll be great for Adam.

Did you end up lobbying to International team captain Nick Price for Adam, in case he didn’t make the team on merit?

We didn’t talk about lobbying for anybody, but he did call me and ask me about Adam and what I knew about him and all of that. We just let it play out until the end. If it had to come out to who the picks were going to be, we all would have submitted our guys and then scrummed about it. Everyone submitted their top three or four picks but when it all came down to it, it became fairly consensus with Anirban (Lahiri) and Emiliano (Grillo). So that’s how Nick did it and I thought it was a great way to do it.

How do you look back on the moment when you beat Tiger Woods at the 2007 Presidents Cup in Montreal?

That was huge at that stage of my career. I was 37 at that time and done some great things. That was just a really special time to do that in Canada. I wouldn’t say ‘bookend,’ but to win my first event on the PGA Tour in Canada and then to win that match against Tiger was… a bit bittersweet because we didn’t win as a team. But I would say it did some great things. I won a tournament within a couple weeks after winning that, so there were a lot of benefits and boosts you can gain from these team events.

You haven’t played much, but you had a couple of solid starts on the European Tour this summer, including making the cut at the Fiji International. How do you feel about your game and your health?

Game-wise is better. The last event in Fiji was a lot better. Health-wise has been pretty good up until Fiji, and since then I’ve been battling a bad back. Since Fiji I haven’t touched a club in two weeks since yesterday. It’s a little hit and miss right now. But my game is feeling good right now.

Is golf still as fun for you as it always has been?

It’s more fun right now than it has been the last few years, without a doubt. Outside this little setback with my back, I’ve been feeling good and excited about my game. I’m loving the game. I still love the game and I’m excited to compete, and the motivation is still there.

Have you and new Golf Canada CEO Laurence Applebaum chatted about a potential role for you with Golf Canada?

There’s been much more engagement with Laurence. We’ve had a couple nice talks at the Canadian Open and we’ll see where that leads. He seems like an enthusiastic guy and hopefully will do some great things for Golf Canada.

Is the PGA Tour Champions on the horizon for you?

I definitely want to play out there. There’s a great crop of guys going in that year when I go in. Mickelson turns 50 that year, so does Ernie (Els), so does Jim Furyk, myself. It’s an exciting time for that year. It’s guys I’ve competed against for a long time and we’re all turning 50 at the same time, which is kind of cool.

What are your thoughts about the Canadian Open? There’s been a lot of talk about that tournament, especially given the uncertainty of Glen Abbey moving forward.

It’s interesting. Obviously it would be great to move it around the country, but I understand RBC’s position on that. They get a great turnout in Toronto so there are a lot of things that need to be weighed out: logistics for where it falls on the schedule after the British Open, then they start thinking about the next weeks and the FedEx Cup Playoffs.

There are so many moving parts to make a decision like that. I’d surely love the event to move into a more prominent position within the schedule, and I think that would help the event and get more top guys there. I’m sure Laurence (Applebaum) is trying to talk to the Tour to get it to a prominent position. It’s been one of the longest events on the Tour so hopefully the Tour gives it some pull and gives it a chance.

How about your Detroit Red Wings? How do you think they’ll fare this year?

Hopefully they do a little better than last year. A young team obviously and a lot of the players we’re accustomed to seeing aren’t there any more for various reasons. Hopefully it’s a nice new era to start building again. Maybe the new building will give the city and the fans a nice charge. They need to start supporting them. I’m optimistic (smiles). Hopefully they can start climbing up again.

You and your girlfriend Michelle have been together for a little over a year now: what’s it been like to have her in your life at this stage of your career?

She’s super supportive, which is great to have. She’s a wonderful woman and does her own great thing with women’s health. Her platform is beauty, but its inner and outer (beauty) and she’s making a difference in a lot of women’s lives and it’s really cool to see. 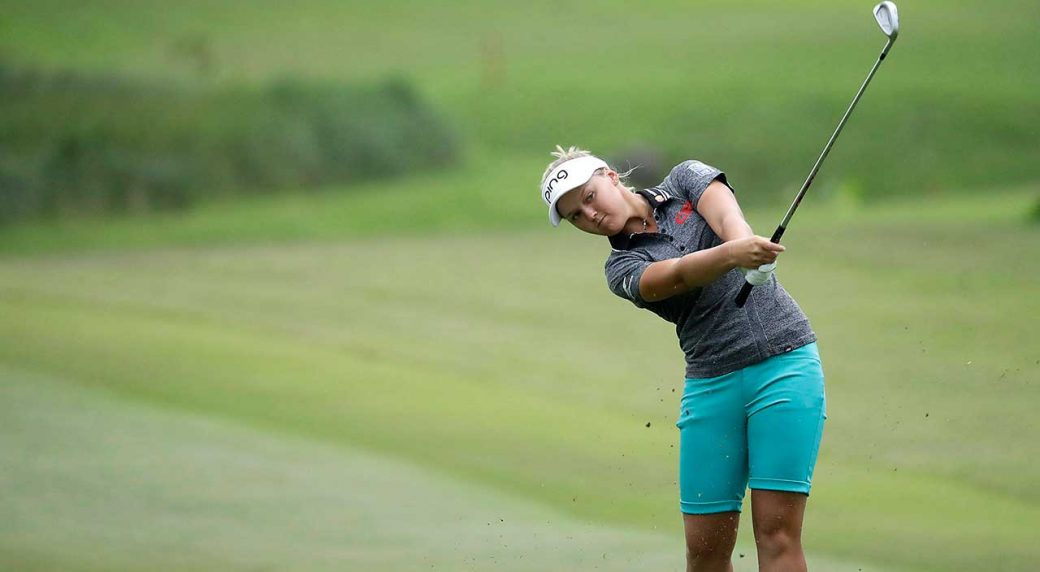 AUCKLAND, New Zealand — Canadian Brooke Henderson took a big step towards her sixth LPGA Tour title in only six holes on Sunday, but will have to resume on Monday after rain, lightning and dangerous winds disrupted the final round of the New Zealand Women’s Open.

The 20-year-old from Smiths Falls, Ont., leads the tournament by four shots at 17-under par from overnight leader Belen Mozo of Spain and American Brittany Lincicome.

Play was repeatedly suspended Sunday because of adverse weather conditions and finally called for the day at 5:30 p.m. local time when a violent squall brought heavy rain and winds which sent advertising boards flying across greens.

Tour officials ruled the tournament would remain 72 holes and players will return to the Windross Farm course Monday to complete their final rounds.

Henderson was 3-under Sunday after her six holes. She birdied the second, fourth and fifth holes to move past the faltering Mozo, who was 2-over after six holes when a trying day finally ended.

Lincicome was 2-under after six holes, with birdies at the second and fifth, and loomed as Henderson’s most likely challenger Monday.

Mozo, who led the tournament by five shots after the second round and by one entering the final round, struggled on the greens Sunday and had bogeys on her first and sixth holes to concede the lead to Henderson.

Norway’s Nicole Broch Larsen and China’s Jing Yan are tied for fourth place at 12-under after nine and seven holes respectively. Australia’s Su Oh was next at 11-under through nine holes while Hee Young Park of South Korea and Thidapa Swannapura of Thailand share seventh place at 10-under.

Hometown favourite Lydia Ko was 1-under after nine holes and tied for ninth place at 9-under, eight shots off Henderson’s lead.

Tournament organizers and LPGA officials were aware of the threatening forecast for Sunday and made provision by bringing forward tee times, hoping to avoid the worst of the weather, which was expected to hit late afternoon.

The first players were off at 7:40 a.m. and the leaders had just teed off at 10 a.m. when rain and standing water forced play to be suspended for the first time.

Players returned to the course at 12:28 p.m. and almost two hours of play were possible before play was suspended again because of the threat of lightning.

Play resumed at 4:55 p.m. but had only continued about 20 minutes before the final, fierce squall spread across the course bringing lashing rain, gale force winds and bitterly cold conditions.